Aqua Cotta - A little known Tuscan gem of a soup that we absolutely love!

It’s specific to the Maremma region in which we are based, and it’s a real meal of soup that includes bread and a poached egg.

Literally meaning ‘cooked water’, aqua cotta takes a short list of basic ingredients and turns them into something magical. It was born out of scarcity: the coal workers, shepherds and farmers in the wilds of the Maremma would carry the basic ingredients around with them so that they could conjure up an aqua cotta wherever they went….Just add water! ;)

It has a slice of stale bread, which is brought back to life in the soup by soaking up the delicious broth and creating a beautifully soft and flavourful heart to the dish. It also has a poached egg on top which means it really fills you up. The soup’s flavour is built up by garlic, onion, celery, tomatoes and some greens, a little cheese, and that’s more or less it!

It’s super cheap, really easy to make, healthy and most importantly, delicious. There are many versions with different takes on how to make it, and of course everyone’s mama apparently has the best recipe, but here’s ours (I’m quietly confident that it’s hard to beat!)

2 large sticks celery, diced, plus a small handful of the leaves from the celery

15-20 ripe cherry tomatoes, halved - they have to be very red and sweet!

1 Fry the onion, celery and chilli flakes in a generous slug of olive oil on a medium heat for 5-10 minutes, or until soft. Add the garlic and fry for a further 3 minutes.

2 Add the cherry tomatoes, celery leaves and spinach and cover with water - enough for a couple bowls of soup. Heat until lightly boiling and leave for around 30-45 minutes. The water should reduce slightly so it becomes a thick, chunky soup. 10 minutes before serving, mix in the cheese and season with salt to taste.

3 While the soup is cooking, poach the eggs in a separate small pan of boiling water for 4 minutes. Remove the eggs and set aside.

4 To serve, rub the stale bread slices a little with half a garlic clove. Drizzle with olive oil, and put a slice of bread in each bowl. Put the egg on the slice of bread, then ladle over the aqua cotta until the bread is well covered by the soup. Scatter the diced shallot over the soup and egg, and serve. 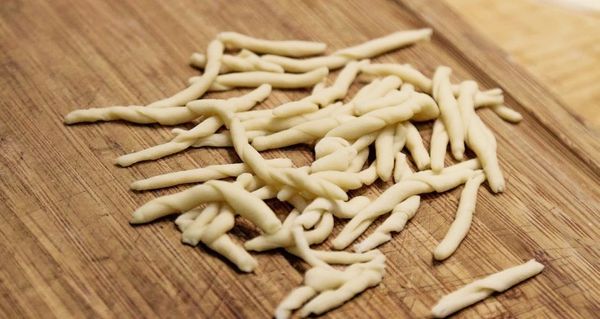 Some pasta shapes’ names have no meaning, they’re just names. Some have very literal translations, as in the case: ‘Strozza' = strangle, ‘Preti’- priests, so ‘Priest Stranglers'!As with 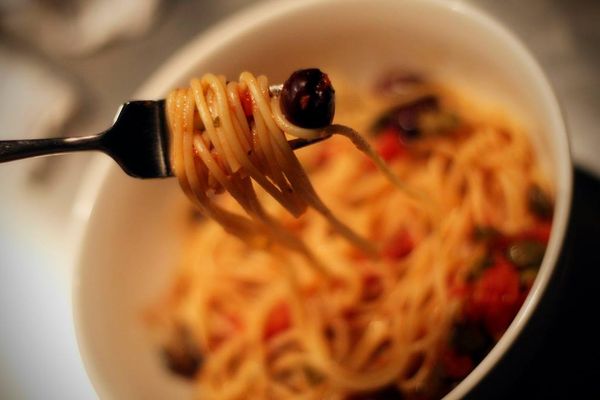